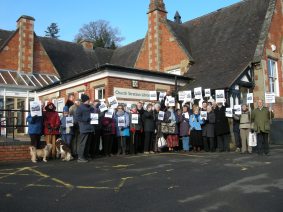 ‘Friends of Church Stretton Library’ has been set up as a charity, to raise funds and enhance the work of the library.

In future, please go to their website at www.strettonlibraryfriends.org.uk for the latest news about the library.

They will need your support if the library is to remain sustainable in the long term.

As our campaign to keep the library in its current setting has been successful this website is closing down.

Thank you to all of our supporters who helped make this campaign successful.

Please join us  for Tea and Cake in the library on Friday March 1st from 10.00am to 12.00pm. We will be there to tell you about  our plans for supporting the library in the future. All donations will go to the library.

We are delighted that Shropshire Council have announced plans to continue running the Church Stretton library in its current building.

We  have been told financial savings will need to be made for the library and Visitor Information Centre to continue in their present form. Talks are to take place between ourselves, Shropshire Council library service & Church Stretton Town Council to explore this further.

We plan to assist by becoming a ‘Friends of Church Stretton Library’ charity to raise funds for the library and enhance its services. We will need support from the wider community if this is to be successful.

We will be setting up this new charity over the next few month. To help us get started, we would welcome advice from anyone with a background in any of the following

If you could spare some of your time to help please email churchstrettonlibrary@outlook.com

It is wonderful news that the library and Visitor Information Centre, both important community resources, will be retained in the town centre.

We would like to thank all our supporters whose efforts over the last four years have helped make this possible.

Thank you to everyone who helped with the library Christmas event last Friday.

The cakes, mince pies coffees and teas were all appreciated and it was great to have support and help on the morning. There was a cheery atmosphere and the junior school children joined us for refreshments after they had sung. All the money raised will be kept and used for Church Stretton library only.

The library staff are keen to have another ‘ Beat the winter weather ‘ coffee morning in the new Year.

Meanwhile we hope you all have a lovely Christmas – and lets hope for positive news from Shropshire Council in 2019.

It was a full house at the Sylvester Horne Institute when the Stretton Players, in conjunction with Church Stretton Library Support  group, presented Interesting Times on Remembrance Sunday..

The event provided a snapshot of life in the Strettons during the Great War as well as the huge personal sacrifice made by the men who went to war and did not return. The script was based on contemporary sources of the time including the contents of local newspapers as well as research carried out by Church Stretton Local History group on the lives of Stretton men who marched away and lost their lives. It also included poems by A.E. Houseman and Wilfred Own as well as popular songs of the time.

Extracts from the local newspapers provided some much needed light hearted humour, including the ladies column, reports from the local Petty Sessions, suggestions for wartime economies and adverts.

‘Spratts Laymore: A food that makes hens lay. Your hens will be healthier and return you more profit If you give them a food which will assist them to overcome the strains of laying. For this purpose there is no food equal to Spratt’s Laymore’. It makes hens lay and keeps them at it. ‘  Church Stretton Advertisor 1914

A huge thank you to all who helped make this event possible including members of the library support group and local history group who carried out the research, the library staff who helped them access archived material and the Stretton players for giving a brilliant performance on the night.

No News on the Procurement process

On 31st October 2017, following a judicial review and numerous public consultations, Shropshire Council began a procurement process to appoint a new organisation to manage a library in Church Stretton.

We are still waiting to hear the outcome of this process.

Church Stretton Library Support Group have united with the Stretton Players to present a special evening event on the 100th anniversary of the Armistice.

Join us for a social record of life in the Strettons during the Great War, combining local news with songs and poetry of the same era.

“…An arrest has been made, a man being captured on the way to Craven Arms, after hiding in the woods for several days…”  Church Stretton Advertiser 1917.

What is Commissioning? What is Procurement? What is TUPE?

On 31st October 2017, Shropshire Council began a procurement process to choose an organisation to run the library in Church Stretton.

We are still waiting news on this and will let you know as soon as we hear anything. Some of our supporters have told us they do not understand what a procurement process involves. We have written the following explanation to assist with this.

What happens when the contract comes to an end?

Contracts are awarded for a limited period of time, usually between 3 and 10 years. During that period the commissioner monitors the service to make sure it is meeting their requirements. When the contract is nearing its end, the local authority will repeat the whole process, so different organisations can compete for the next contract.

When a contract is awarded to a new organisation, there is a legal requirement to transfer the people currently delivering that service so they become employed by the new organisation e.g. the bin men who used to work for the local authority now work for Veolia. This is known as T.U.P.E (Transfer of Undertakings (Protection of Employment) Regulations 2006). People transferring retain their existing conditions of service so not only their salary scale stays the same, but they retain other benefits such as annual leave, sick pay, maternity leave and pensions.

NB This description has been kept simple for ease of understanding For a more detailed explanation of Commissioning and Procurement see:

You might have seen in the Shropshire Star and South Shropshire Journal that the procurement process for the library has begun .

It is not possible for us to comment  on our plans while the procurement process takes place.

The procurement process is expected to end sometime in March.

BACH: the organist in Music and Pictures

Richard Walker will be giving a talk on the organ music of Johann Sebastian Bach, using not only visual illustrations but demonstrations on the organ at All Saints’ Church, Little Stretton.

This is a wonderful opportunity to explore and enjoy the glorious sound of this most superb 18th century composer.

The evening will include pictures of the churches where Bach worked, and the organs that he played.  The music will span his career from music written in his teens, the youthful Toccata and Fugue in D Minor and some of the more mature compositions from his final years at Leipzig.  It’s wonderful, varied music and this talk will put it into context.

Visitors to the Rural Charities shop on the High Street will have noticed that they are now selling second-hand books, supplied by CSLSGL,  to raise funds for the Library Support Group. The books are marked with a coloured sticker and the proceeds from each one sold goes towards our work to keep the Library in the centre of the town. CSLSGL are grateful for this support and the support we have had from many businesses in the town.